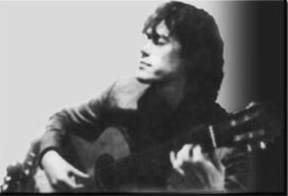 Michael Benedik, born in the German town of Duisburg, studied guitar at the Musikhochschule of Dortmund. He continued his studies in the Dutch music academy of Utrecht under his tutor, guitarist and composer Dick Visser. After finishing his studies with the degree of master performer he developed himself to an established guitar player in the classical and the contemporary repertoire.

As a soloist he has performed throughout Europe in cities like Paris, Siena, Vuelva, Amsterdam and Stockholm. Together with guitarist Martin Kaay he formed a Duo in which he played at several Dutch Music festivals and at the German Mettmannergitarrenfestival. He extended his guitar play as well to the Spanish flamenco style and contributed to several productions with the flamenco-guitarist Eric Vaarzon Morel .With his own guitar trio, “Trio Benedik”, he annually performed in several Scandinavian summer festivals, among others the Bahstadt festival in Norway.