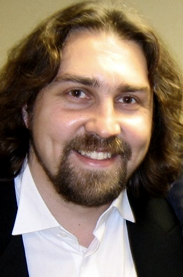 Timur Sergeyenia was born in the Belarusian city of Misnk, started music lessons at age three under the instruction of Vladimir Kuzmenko at the institute for gited children of the towns’s music conservatory. At age four he made his first public appearance with his own compositions and at age seven he played regularly with some of the USSR’s most distinguished orchestras. Sergeyenia was formed as a pianist in the tradition of the Russian piano school emphasising an individual approach towards transforming music to its own needs.
Important teachers in Timur’s career in Misnk were Irina Tswetajewa and Valeri Schatskij and in Moscow: Naum Starkman, they all can be consider pupils in the legacy of the great Russian piano pedagogue Konstantin Igumnow.
In 2009 he played a role in a docudrama directed by the famous documentary director Pierre Viallet called “Hommage an Robert Schumann”, characterizing Schumann and performing his music as a pianist.
Next to his professorship at the royal music conservatory of the Belgian city of Brugge and and Leuven, he enjoys an extensive solo career and as a conductor with his self founded string orchestra “Timur und seine Mannschaft” (Timur and his team).