María Sobrino Gutiérrez studied piano and chamber music at the ‘’Conservatorio Superior de Musica de Salamanca’’ (Spain) from 1997 until 2001. She was there instructed by Christina Ferriz (piano) and Alberto Rosado (chamber music). After her final exam in 2001 with the degree of performing artist she continued her studies in the Netherlands. At Utrecht’s musical high school under supervision from Paolo Giacometti (piano) and Martine Visser (clavecimbel) she succesfully finished her piano studies in 2003. Nowadays she gives lessons at her former conservatory in Salamanca and is travelling between Spain and the Netherlands to give concerts in both countries. 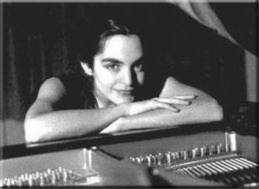